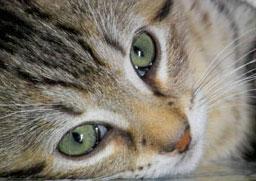 Can cats catch a cold from a human? Are there any diseases that humans can get from their cats?

As far as strep throat goes, it is actually the human that can infect the animal. The cat or dog, once infected, however, can in turn infect another human.

When I attended the Feline Infectious Diseases Symposium in Washington, D.C., an entire day was spent discussing feline zoonoses (diseases that can be transmitted to humans). Although there are a lot of potential zoonoses, the typical healthy urban pet cat presents minimal risk to its owner.

The primary zoonoses of concern from a household pet would be ringworm, pink eye (chlamydia), roundworm larval migrans, giardia, and cat scratch fever. Most of these are preventable. Cat scratch disease is caused by a small bacterium, Bartonella henselae. Kittens are more likely to harbor this agent and fleas may be capable of transmitting it to other cats and possibly to humans. Clinical signs in people include regionally swollen lymph nodes and the condition is usually self-limiting. This disease, however, can be quite serious in immunosuppressed people or people with AIDS. Infected cats usually show no clinical signs, but blood testing is available to determine carriers. Routine testing is not being advocated, however, unless there is concern on the part of the owner.

Other gastrointestinal zoonoses include cryptosporidium and toxoplasmosis. Both are microscopic protozoal organisms. Clinical cryptosporidiosis is generally a self-limiting gastrointestinal disorder, but it can be fatal in AIDS patients. Overall incidence in the household pet population is low, however.

Likewise, the incidence of toxoplasmosis is also low in household pets. If a cat were to become infected, it is only capable of shedding the organism for a very brief time period (approximately two weeks). Repeat shedding is rare.

We are by appointment only Monday – Friday.

When our doctors are unavailable, after hours emergency service is made available through two regional pet emergency care facilities: